The Dent Eraser is the amazing magnetic dent removal system for use on brass bodied musical instruments. Dents that would otherwise have required many hours of labor to remove can now be repaired in minutes with this tool. The patented Dent Eraser works through the use of rare earth magnets and precision manufactured steel balls to substantially simplify musical instrument dent repair.

Fig 3. Dent out of reach

A major drawback to this method of dent removal is it's tendency to harden the brass of the instrument. When an instrument is dented, that portion of the brass body is stretched. If a steel ball on a rod is used to press the dent up from inside the bore, only the skill of the technician stops the ball from stretching the brass too far up from the inside of the instrument. Often the dent appears to be removed but actually becomes a bulge in the body. The area around the bulge is then expanded so the bulge is not visible.

Fig 5. Dent removed and stretched - Although this is an exaggerated diagram, the problem is clear. The instrument body is no longer in its original shape and the brass at the area of the dent has been worked more than necessary. The amount that the metal is worked depends on the skill of the repairer.

Whenever brass is manipulated, it becomes more brittle, greatly increasing the chances that the metal will crack or split. This is known as work hardening the brass. When an instrument is dented and then bulged out farther than it's original shape, it hardens the brass body of the instrument and increases the size of the bore in that area. The brass is hardened once when it is dented, and then hardened again when the dent is removed and over stretched.

The pressure that would traditionally be exerted by the technician to force out the dent is now exerted by the magnet. The only force that needs to be applied by the technician is to move the magnet and ball horizontally over the dent. Because the brass is sandwiched between the magnet on the outside of the instrument and the ball inside the instrument, it is impossible to bulge the brass unless the magnet and ball are forcefully pulled away from the body of the instrument. Under normal operation of the Dent Eraser, this will not happen. This means that the brass is less work hardened and the bore is less distorted using the Dent Eraser than by traditional dent removal methods. 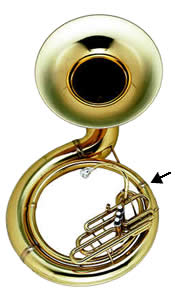 The Dent Eraser comes with five steel balls, two magnets and one handle. One magnet is smaller for removing dents in thinner, softer brass such as sousaphones and other large brass instruments. It is best to start with the smallest magnet and the largest steel ball that will fit into the bore at the point of the dent. The larger magnet should only be used when the pull of the smaller magnet is insufficient. Explaining how to use the Dent Eraser may take longer than actually removing dents.

Occasionally during dent removal dirt and hard grime on the inside of the bore will telegraph through the body of the instrument, so it is important that you clean the instrument body inside and out near the location of the dent if possible. The magnets and steels balls that you will be using should also be wiped clean and lubricated.

Roll out the dent by moving the magnetic handle over the dent with a back and forth motion. The magnet will pull the steel ball through the body removing the dent. If the pull of the magnet is not sufficient to remove the dent, the stronger magnet should be used.

This article should give you a basic understanding of the patented Dent Eraser. The techniques discussed here are not the only ways to use the Dent Eraser. I receive emails everyday from technicians who have found new ways to improve their dent work with the Dent Eraser. If you find a new technique using this tool, please contact me and share your ideas.

Curt Altarac is a Saxophone Repair specialist, owner of MusicMedic.com, teacher and performer. Curt received his bachelors degree in Music Education from S.U.N.Y. College at Fredonia and his Masters degree in Saxophone Performance from U.S.M.. He currently resides in Southport North Carolina and is active throughout the US as a clinician repairer and performer. You can contact Curt Through his website www.MusicMedic.com.