Fixing a Stuffy Note with Sandpaper

About 3 years ago I invented a technique that has worked so well that I now use it in many of my repairs. The problem I was trying to fix was a stuffy note on a Buescher Alto Sax. The note is the alternate (or forked) F#. Because the tone-hole for this F# on a Buescher alto is very small, nearly every Buescher alto suffers from a stuffy F#. Opening the key height makes the stuffiness better, but it's still present.

It is not air that we are necessarily dealing with inside a saxophone, rather it's a wave, and further it's a standing wave. Knowing this, I still had the feeling that allowing more air to escape the tone-hole would improve the tone of this particular note. Considering ways to do this, I thought about adding a scoop of sorts onto the tone-hole that projected into the bore. Something like an air foil. I also thought about adding a vent somehow to that area. Finally it hit me to try adding turbulence on a low level to reduce the overall turbulence experienced at that tone-hole. My thought was that this might work the same as the dimples do on a golf ball. By adding turbulence near the surface of the tone-hole, air might be allowed to rush out of the tone-hole more freely.

Consider a large mass of air traveling over a rough surface. The air that is directly in contact with the rough surface will whip around in turbulent circles. These circles of air act like bearings for the rest of the air to travel over, reducing total friction. So adding turbulence actually increases the air flow. This is what I hoped would happen in the tone-hole.

I tried roughing up the tone-hole with sand paper and worked a little. I was surprised that it worked even a little! I took the idea a step further and added a liner in the tone-hole made of sand paper. After gluing the sandpaper in the tone hole and playing the note, I was amazed that it really improved the tone. The stuffy hissing air problem was nearly solved. Adding sand paper to the tone hole made a stuffy note much less stuffy.

I have also found that “The sand paper trick” works to take the fan or warble noise, that plagues so many sax players, out of octave C when playing at higher dynamics on instruments such as modern Selmer altos, vintage Conn's, vintage Bueschers and many other instruments.

Almost any tone that is stuffy can be helped with this trick. However, I suggest searching for a solution such as mouthpiece, reed or key height before implementing this fix. Also, it seems to be that the lower the tone is on the horn, the less the fix works. That it, the “sand paper trick” does not work as well on the low B stuffiness present in so many saxophones.

Here is how I install the sand paper. For ease of viewing, the work below is done on a horn without keys or posts. Of course, one would not need to remove this many parts when doing this simple job.

1. Remove the key and clean the tone hole with alcohol.

2. Cut a strip of sandpaper. 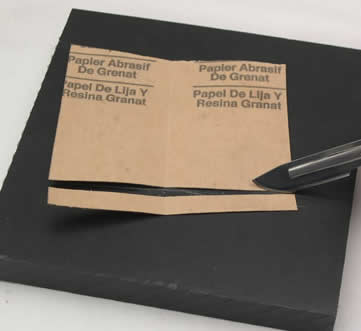 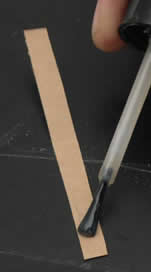 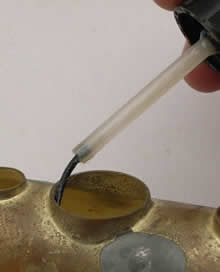 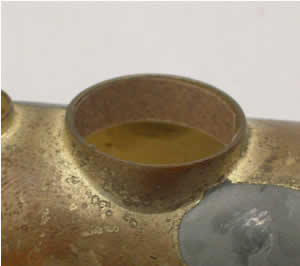 4. Apply thin (non-gel) super glue to the sand paper face and let it soak in. This makes the sandpaper much more permanent.

5. Cut the sandpaper to match the contour of the body. 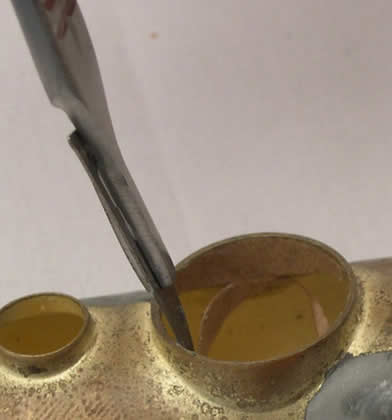 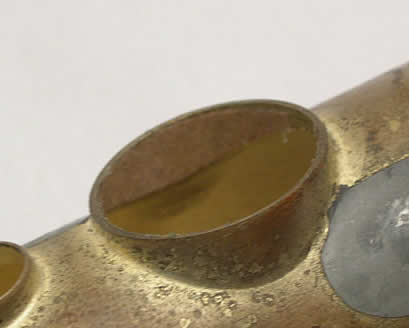 6. Apply more super glue as needed and make sure the sandpaper is secure.

7. Clean the tone hole surface making sure it is not covered with adhesive.

Although I have never had a piece of sandpaper I glued in come loose, I'm always concerned that it will. A swab might grab it or the water in the horn might soak into the paper and de-laminate it. That said, when I find that this trick does not work I always remove the key and remove the material from the tone hole.