$9,500.00
In stock
For sale is a 1949 Selmer Super Balanced Action Tenor, serial number #408XX. This freshly Uberhauled and legendary horn comes with Chocolate RooPads with gold plated domed metal resonators. It has all new synthetic materials, pearls, and gold plated needle springs. The engraving was faint so the engraving was restored in-house but we left the lacquer as-is.
Add to Wish List Add to Compare
Email
Skip to the end of the images gallery 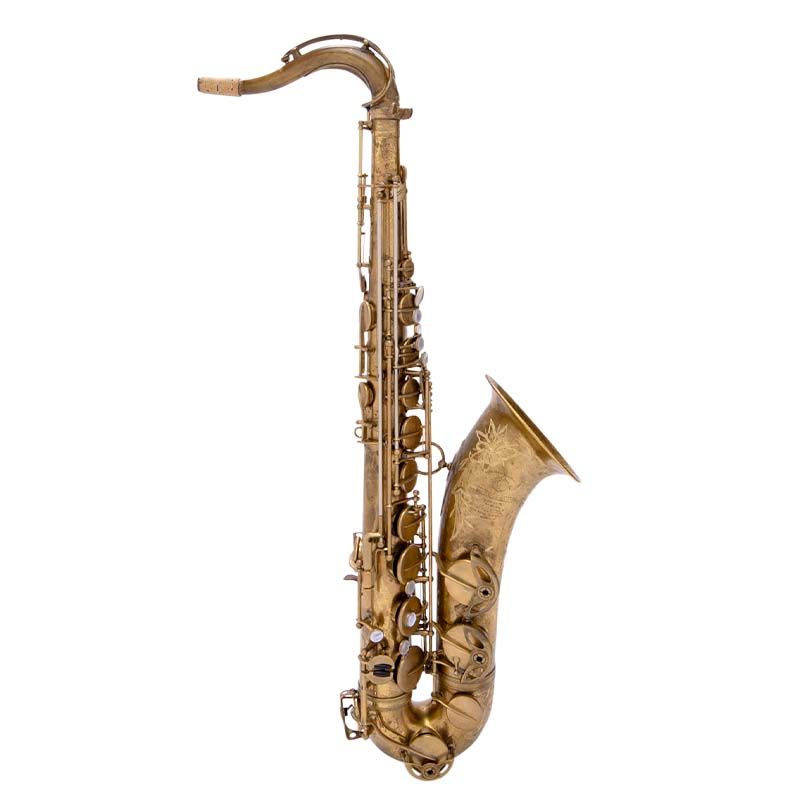 Skip to the beginning of the images gallery
Details

For sale is a 1949 Selmer Super Balanced Action Tenor, serial number #408XX. This freshly Uberhauled and legendary horn comes with Chocolate RooPads with gold plated domed resonators. It has all new synthetic materials, pearls, and gold plated needle springs. The engraving was faint so the engraving was restored in-house but we left the lacquer as-is.

The Front F has been replaced with a modified Series II style Front F, but the original comes along as well if you care to switch it back to the original or enjoy a little keepsake. Other modifications include forked Side Bb and C, key contacts under Bb, C, E, Low C, and Low Eb, and an expanding teflon ball octave mechanism.

This tenor also comes with two necks. The original and one we made here at the Sax ProShop. We are confident that this tenor’s new owner will agree that the neck we made outplays the original in tone, intonation, response, and projection.

Comes with a functional contoured SKB case. If you require something more durable, let us know and we can help.

A note from Curt Altarac about this instrument:

My late friend Bob Scalia’s tenor is very special to me. When I relocated my business to North Carolina, Bob’s horn was the first overhaul I did at the new shop. We quickly became friends and I played in many ensembles with him over the years including The Wilmington Big Band, The Wilmington Jazz Messengers, a classical quartet, and other ensembles.

Bob had some wild stories from his lifetime of gigging. One of those stories was about his mouthpiece. One night, Bob was out with Stan Getz, doing stuff that jazz musicians do together, and they were talking about mouthpiece trouble. Stan told Bob that he had a mouthpiece he wanted to give him. A couple years later, Stan remembered the conversation and called Bob up and said I’m sorry it’s been so long but I owe you a mouthpiece. He sent one, an Otto Link, along with a note that Bob treasured and Bob used that mouthpiece for the rest of his career. The mouthpiece and the note were sold separately from Bob’s tenor.

Bob’s wife Barb wanted to make sure that Bob’s tenor got into the hands of someone who would play it and love it just as Bob had his whole life. We’ve been sentimental about it leaving the shop, but it’s ready and it absolutely rips. Bob was known for having a powerful round sound and our play tests on it confirm that this tenor was instrumental to his sound.

We think Bob would approve of the work we did on this instrument and we hope you approve as well.